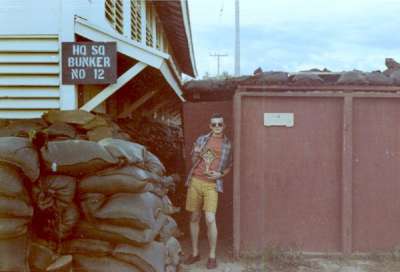 (Dave Rabbit during his tour of Vietnam)

Radio First Termer, was an American pirate radio station/program for US soldiers during the Vietnam War. It's host and operator, Dave Rabbit ran it completely illicitly with stolen equipment from a brothel in Saigon where it was broadcast on FM 69 (the channel number selected because of its sexual connotation), and from there it was relayed over all of American occupied Vietnam.

The channel aired rock music (still too controversial at the time to be ubiquitous especially within an US military operation) and comedic skits with subversive themes.   To introduce Radio First Termer to a radio audience for the first time, Dave hijacked an existing official US military station and preempted the broadcast telling listeners to switch their dials over to 69 FM (in a style similar to the famous Captain Midnight and Max Headroom "signal intrusion events" of the following decade).  The station became very popular, inspiring a large and dedicated following.

Dave died in 2012 at 63 years old, but shortly before he wrote this very interesting autobiographical account of Radio First Termer and his time DJ'ing in Vietnam.